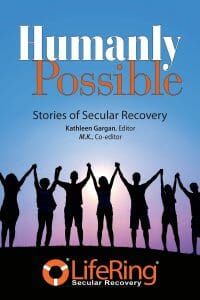 Humanly Possible is about success in recovery from substance addiction. There are many such books, but what sets this one apart is its emphasis on secular recovery. This book shows that recovery without religion is not only conceivable but readily achievable. These stories come from members of LifeRing Secular Recovery, SMART Recovery, and AA Freethinkers, organizations that seek to help people free themselves from addiction without pressuring them to believe things that are foreign to their world-views.

"Narration is the quintessential form of customary knowledge”
-Jean-Francois Lyotard

"We tell ourselves stories in order to live.”
-Joan Didion

Stories are said to be as necessary to humankind as food and shelter and love. They compel, entertain and delight us; they soothe our fears and give shape to our hopes and dreams. They are like mirrors where we recognize ourselves in the struggles of champions and monsters alike. They overcome the distances between us by allowing us to identify with each other. These are some of the ways that narrative gives meaning to lives.

For those of us who seek relief from addiction, stories are essential in a concrete way. Narrative is a kind of evidence, and as such it has power; and power is famously assumed to be lacking for people with addictions. The power of narrative evidence is in its capacity to inspire belief in the possibility of recovery.

Certainly, as anecdotal evidence, narrative does not carry the weight of rigorous scientific studies. But the experimental study of addiction has thus far not brought the kind of relief that would make other kinds of evidence unnecessary. This slow progress may be the result of the extraordinarily complicated nature of addiction, involving, as it does, both the body and more illusively, the mind. It may be the result of moral and political prejudice. In either case, in the absence of a conclusive medical explanation of addiction, narrative provides strong evidence for demonstrating the varied “mechanics” of secular recovery.

The stories offered in this volume, of individuals living free of addictions by means of purely secular ideas, tools and practices provide powerful testimony that what was not long ago thought to be possible only by means of supernatural intervention, is also “humanly” possible. This volume was inspired by the need for such evidence. Without it, countless people whose worldview is strictly secular, have had little basis for believing that they might live according to their own conscience and be free of addiction at the same time.

According to Aristotle and other students of rhetoric, individual stories can often be tracked according to the following universal structure of drama: first, the rising action, which portrays a conflict between a protagonist and an antagonist, then a crisis or turning point, and finally a resolution. Even if life itself is rarely so clearly organized, this dramatic structure has proven useful, and often characteristic of the lives of many recovering people.

Many of the stories in this volume are written by people who have recovered with the help of tools learned in part from LifeRing Secular Recovery. They are not professional writers, but their stories follow the universal structure of drama. The rising action in many LifeRing stories describes a progressive path to recovery in terms of a give and take between a Sober Self and an Addicted Self. The turning point in many of our stories involves making peace between the Sober Self and the Addicted Self. The resolution is accomplished by taking action on behalf of the Sober Self which we believe exists in every person who is suffering from active addiction. It is the Sober Self within us all, that human sized protagonist, living in a fully natural world, that we learn to nourish as the hero in ourselves and each other in LifeRing. LifeRing and other secular recovery organizations are composed of sober selves joining together to affirm and celebrate their sobriety.

The word secular derives from the latin seculum meaning “of this time or age”. Those of us in secular recovery do indeed conduct our lives, not on the basis of what was believed at an earlier time, or on what may happen in another world after we die, but according to what is known thus far by means of practical evidence. This means that our stories describe what has worked for us from the ideas, tools and practices that derive from the natural world, here and now. It is our hope that this volume might contribute to the mounting evidence that secular recovery is possible for those who need it.