As mentioned previously, the 2011 LifeRing Annual Meeting was held on June 3, 4 and 5 in Oakland, CA. For a bare-bones recap click here. This report will be more comprehensive and will try to give the flavor of the event for those who weren’t there.

A LifeRing gathering of any kind is always as important for its unspoken emotional impact as for the information that flows freely. This is especially true for the Annual Meeting. The atmosphere is rich with an aura of freedom and a life re-gained that so many of us feel – that sense of liberation that comes from dealing once and for all (we hope) with addiction. Those present had anywhere from a few days to a few decades of clean and sober life, but they all shared a real appreciation for recovery and a strong desire to bring it to others.

I remember my first LifeRing Congress, as it was then called. It was in 2002 in Berkeley, CA. I was six months sober, shy and scared, and yet I felt the need to grow closer to the organization, to actually meet with others (all of my recovery work had been done online) who seemed so similar to me, unlike the people in my “real” life. I met people I knew from the LSRmail email group and many, many others. Being there greatly strengthened my commitment to sobriety and to LifeRing. Back then, just as happened last weekend, I breathed the air of freedom and hope, and saw clearly both the need and the opportunity for becoming involved in providing what we offer to others.

This year we expanded the event to three days, adding a full day of workshops on Friday, June 3, at a conference room down the hall from the LifeRing Service Center in downtown Oakland. Topics dealt with were a bit more ‘hard-core’ that our usual fare – planning issues and the like – and we were very excited by the turnout – not the half dozen we expected, but almost 30 people! The turnout, and the enthusiastic participation during the day, made clear that many, many LifeRingers are deeply interested in the group’s success. The day was organized and led by Lynn C. Here’s her report:

“Although we had originally expected that just a few people would attend Friday’s workshops, it was standing room only all day long!  More than 25 people participated in discussions about planning, resources, and outreach.  Presenters included Troy S, Bob A, Liz G, Mona H, Rodger H, Fred, Lauretta M, Kathleen G and Lynn C.  Highlights included Troy’s and Bob’s presentations about what it is like to try organizing for LifeRing’s initial outreach in a community, and Liz’s presentation on the potential for expanding LifeRing’s toolbox through better organization of our knowledge resources.

“This was the first time we’ve tried full day of workshops at our annual meeting.  We learned that if we try workshops again we should perhaps cover fewer topics and provide more time for discussion.  But it was certainly a lively time, and the day flew by!  It’s clear that there’s enough work ahead for LifeRing that we could develop several workshops related to organizational subjects each and every year.”

After the workshops concluded, tables of light snacks and beverages were set up (thank you Shauna and Njon!) and a reception was held for all LifeRing members to mingle a bit. Much of the mingling was in the hallway of the grand old building that houses the LifeRing office (LifeRing World Headquarters as we sometimes call the tiny 2 room suite). As always happens when LifeRingers gather, the talking came freely and easily, even between people who had never met before. There’s a warmth and intimacy that flows from knowing we each share experience with addiction – even people who became deeply isolated while drinking/using bloom like spring flowers when immersed in a group all of whom have this same condition.

The reception ended fairly early because the office building itself locks things up at 7 p.m. People had the evening free and visitors from outside the area could explore a bit.

Saturday’s activities started early at the home of Lauretta M., a Board member who happens to live practically next door to the Kaiser Hospital tower where the day’s events would take place. Lauretta offered coffee, pastry and a warm greeting to all.

The program was scheduled to begin at 10 a.m., a later-than-normal start necessitated by the heavy use of the conference rooms at the hospital. As it happened, at 10 there was a meeting still going on in the room we expected to be available at 9:30 so it could be set up for our event. We milled in the hall, not knowing what to do, with visions of disaster flowing through a mind or two. But among most attendees, there was complete equanimity. This group truly didn’t sweat the small stuff! And rightly so – after a brief delay, the room was made available and we were able to make some quick emergency trims to the schedule (“welcoming remarks” cut to 30 seconds from 15 minutes, undoubtedly to the relief of the audience) and get back on track.

The first presentation was by founding CEO Martin Nicolaus and his successor (with a title change to Executive Director), Craig Whalley. Marty ran through the history of the formation of LifeRing and Craig tried to give a look at the future. Marty’s talk was fascinating in many ways. Only a few people are still active who were involved in the group’s ancient history (only 10 or 15 years ago!) so it was most enlightening to learn from whence we come. Craig spoke about his hope that LifeRing can become more professional and modern, and called for a year-long planning process to help set the course for the future. He freely admitted that he lacks Marty’s energy and experience and emphasized the need for all concerned members to contribute to the group’s efforts. He praised Marty for the way he handled the transition to new leadership. He also made clear that the role of Executive Director is a stressful one, despite the wholehearted support he had received from all involved for the past year. He’ll be taking a half-step back in the coming year and let someone else take the lead spot.

The Psychology of Decision Making

Our first guest speaker was John Monterosso, Ph.D. Dr. Monterosso is a neuropsychologist, who uses functional MRI imaging to elucidate brain function.  He talked to us about competing models of impulsivity and self-control, and argued against the notion that more primitive parts of the brain (like the limbic system) were vying for control with more recently evolved portions (like the neocortex).  One reason for believing this to be true, he pointed out, was that relapses often involve a great deal of higher-level thinking and planning.

After a break for lunch, we heard from Timothy Durazzo, Ph.D., from the University of San Francisco. Dr. Durazzo shared with us an overview of the brain’s “reward system.”  He argues that this system is highly adaptive, and evolved in order to help humans survive; but that powerful, addictive substances can “rewire” the system and give rise to addictive behaviors.  The good news is that the system is also capable of recovery.  Dr. Durazzo shared with us some exciting preliminary research results suggesting that functional brain imaging can predict who will, and who will not relapse following a standard course of treatment. He did emphasize that the predictions are not determinative – nobody is doomed to relapse, even if there are brain-structure characteristics that seem to make it more likely.

Simultaneous workshops in separate rooms were next on the agenda: one on Mindfulness in Relapse Prevention, and the other 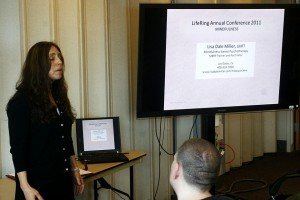 a Convenors’ Workshop: Inside a Dynamic LifeRing Meeting. The mindfulness session was offered by Lisa Dale Miller, MFT, from the San Francisco area. Ms. Miller trained with Dr. G. Alan Marlatt, Ph.D., a psychologist in Seattle, Washington who became known for developing a program called “Mindfulness-Based Relapse Prevention.”  Ms. Miller conducted a workshop for us in which she presented some of the core principles of mindfulness, explained their roles in preventing relapse, and gave us a couple of concrete examples of tools that we could share with others at our meetings.

The convenors workshop featured several veteran convenors interacting with the audience to cover various aspects of running a successful meeting. There was some interest among face-to-face convenors about the possibility of integrating some of the Internet tools already successfully employed online, such as an email group for members of a face-to-face meeting to enhance their contact and support.

The final panel of the day was from several representatives of places outside the Bay Area that have experienced rapid growth in the number of LifeRing meetings. These include Denver, CO; Greenwich, CT; Dublin, Ireland; and Modesto and Sacramento, CA. The central message was not surprising – it takes intensive and persistent effort to grow meetings in an area. Getting others involved not just in attending meetings but taking on other roles is extremely important, and this is much helped by adding a social dimension to LifeRing’s presence.

Later Saturday evening, almost 40 people gathered at the Cocina Poblana Restaurant for a wonderful meal and some relaxed social interaction. Executive Director Craig Whalley handed out Pioneer Awards to several people, including one to Marty Nicolaus, in recognition of his many years of work for the organization.

On Sunday morning, the delegates to the annual LifeRing Congress gathered to give reports about their meetings and carry out official business, including election of members to the Board of Directors and consideration of bylaw amendments. The reports, as always, were often deeply moving as triumphs and setbacks were touched on amidst the details of who, what and when.

There was one proposed change to the bylaws, an item that was tabled last year in Denver. It dealt with the question of compensation for LifeRing officers, which is now forbidden. No current officer is interested in being compensated and there’s no money for that anyway, but the thought was that we should perhaps be prepared for that possibility in the future, especially in terms of having a paid Executive Director. After considerable discussion, the motion was tabled again, available to be discussed at the next Congress in 2012.

Elections for the Board were held, with four seats up. Three terms end every year, plus any mid-term vacancies filled by the Board have to be ratified by the Congress. All four people currently holding the seats ran for re-election and nobody else was nominated, so the incumbants were elected by acclamation.

The election concluded the business of the Congress.

The final event of the weekend was a meeting of the Board of Directors, it’s only opportunity to meet face-to-face all year, since a number of Directors live in various places around the country.

The Board unanimously elected Kathleen Gargan to succeed Craig Whalley as Executive Director for the next year. Craig had asked for a reduction in his responsibilities and Kathleen offered to step in. They plan to work closely together. Craig was elected Chairman of the Board. Robert S. was re-elected Treaurer and Tim R. was re-confirmed as Secretary.

The bulk of the meeting was spent discussing a Planning Framework offered by Lynn C. that creates a “plan for planning” – an outline of a year’s worth of discussions, meetings and (tentative) decision making intended to lead to an actual plan of action for the organization. The majority of the Board wanted more time to consider the Framework, so a final decision on adoption was put off for a month. It is hoped, though not certain, that a final plan will be ready for adoption by the 2012 Congress.

The Board adjourned its meeting at about 2 p.m. and the 2011 Annual Meeting came to a close.